Agisoft Metashape Professional 1.6 introduces a new approach for generating drone flight plans for objects with complex geometry. With this version flight plans become more predictable and easy to follow and specification of no-fly zones is enabled.

Mission planning feature works as follows: at first, photos captured during a simple overhead flight are used to create a rough model. Then, a set of the viewpoints which are enough to cover the surface of the object with sufficient overlap is generated. Finally, a round-trip passing through all the generated viewpoints is computed and saved in KML file format.

Complete workflow is described below in detail:

To create a mission plan:

1. Make an overhead flight over the region of interest to capture a basic imagery set. To capture vertical and concave surfaces better, you may use an oblique (photogrammetry) survey preset in your drone app instead of taking only nadir photos.

2. Load photos to Metashape and align them, then build a model of the object. As only rough geometry is needed for mission planning step, you can build mesh from sparse cloud or using low quality depth maps to speed up computations.

Check that the Bounding Box to include entire area of interest. 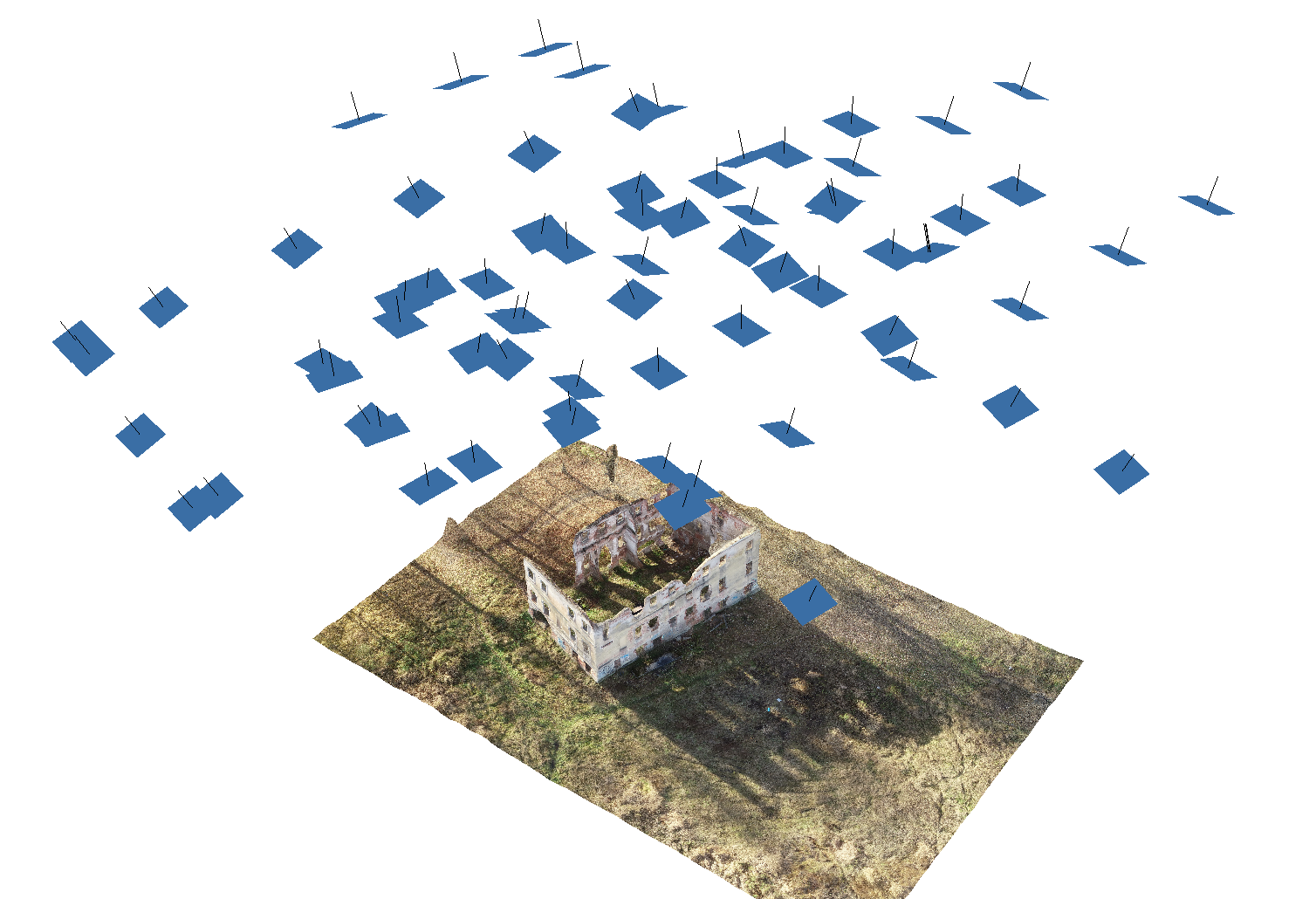 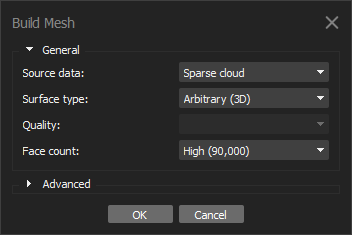 Important! The chunk should be georeferenced by the camera locations or control points (markers), if you wish to create the flight plan for a drone/UAV!

3. Specify home point for the drone at the expected take-off point. This can be done by placing a Point shape on the rough model (corresponding instrument is available on the Toolbar in the Model view). To place point precisely, you can build texture for the model or pick point from an overhead photo (in Photo view mode) that observes home point.

For better convenience input the point label via the Properties window: 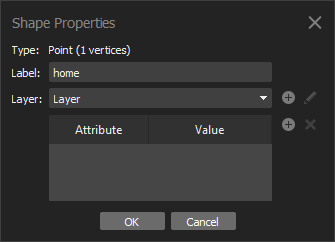 To enhance flight safety, you can specify zones allowed & restricted to fly in. To create a zone, add a shape layer using Workspace -> Shapes -> Add Shape Layer and mark regions using Polygon shapes. A layer can later be used as the one containing allowed or restricted flight zones, respectively. It is convenient to draw flight zones in orthographic projection (Model Menu -> View Mode -> Perspective/Orthographic) 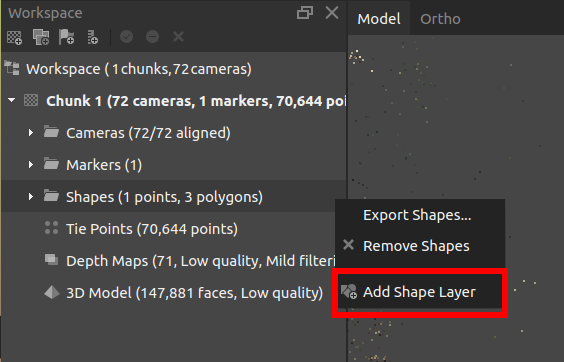 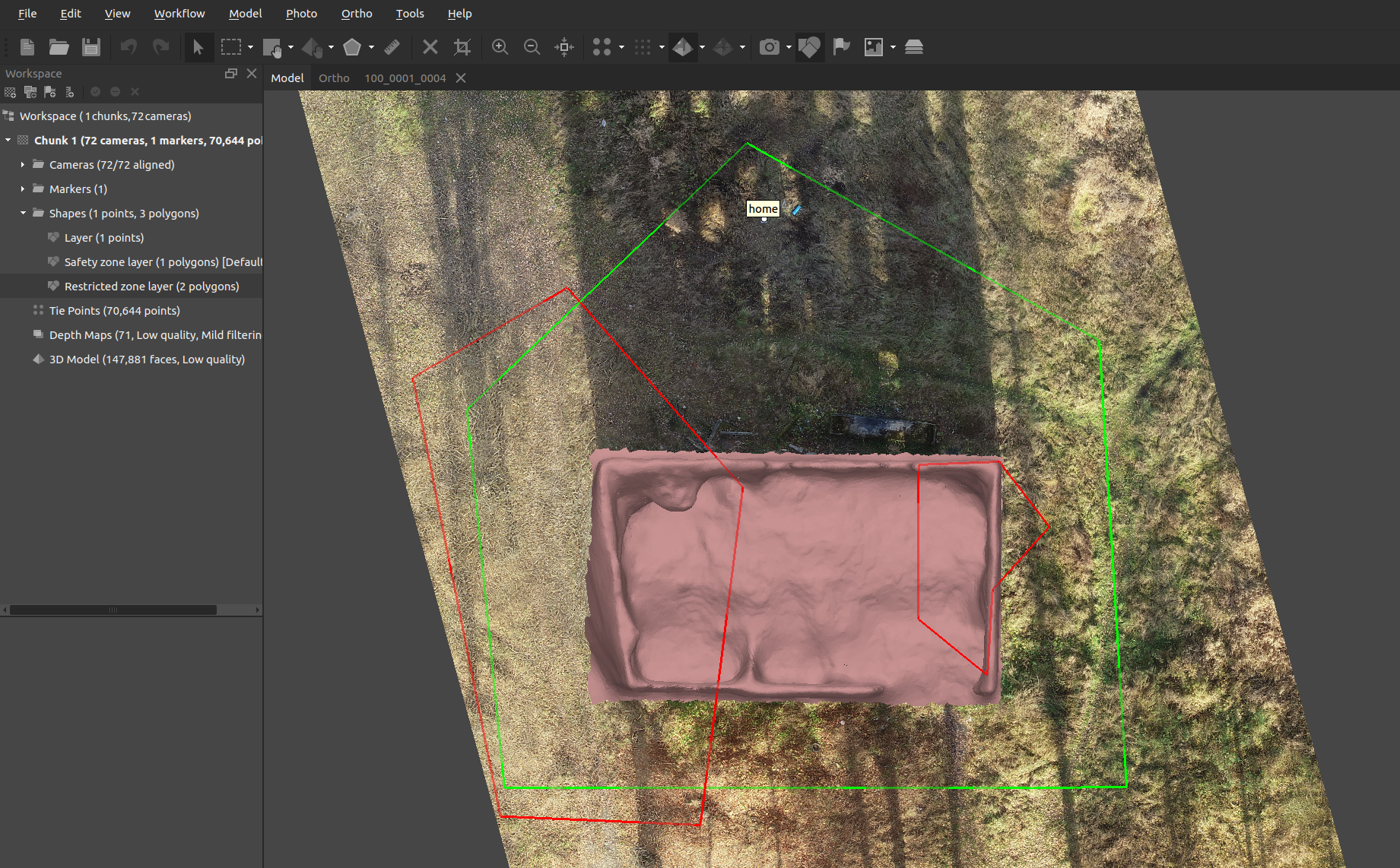 Screenshot above shows the Home point, flight zones & region of interest. Areas related to trees, which are unreconstructed in the rough model are marked as no-fly (restricted) zones

Specify parameters according to the description given below (in the Plan Mission dialog parameters overview) and run processing. Round-trip will be available as one or more camera tracks in the Workspace pane. 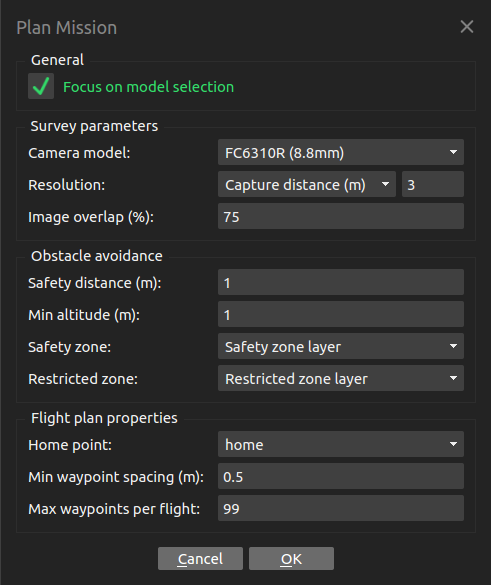 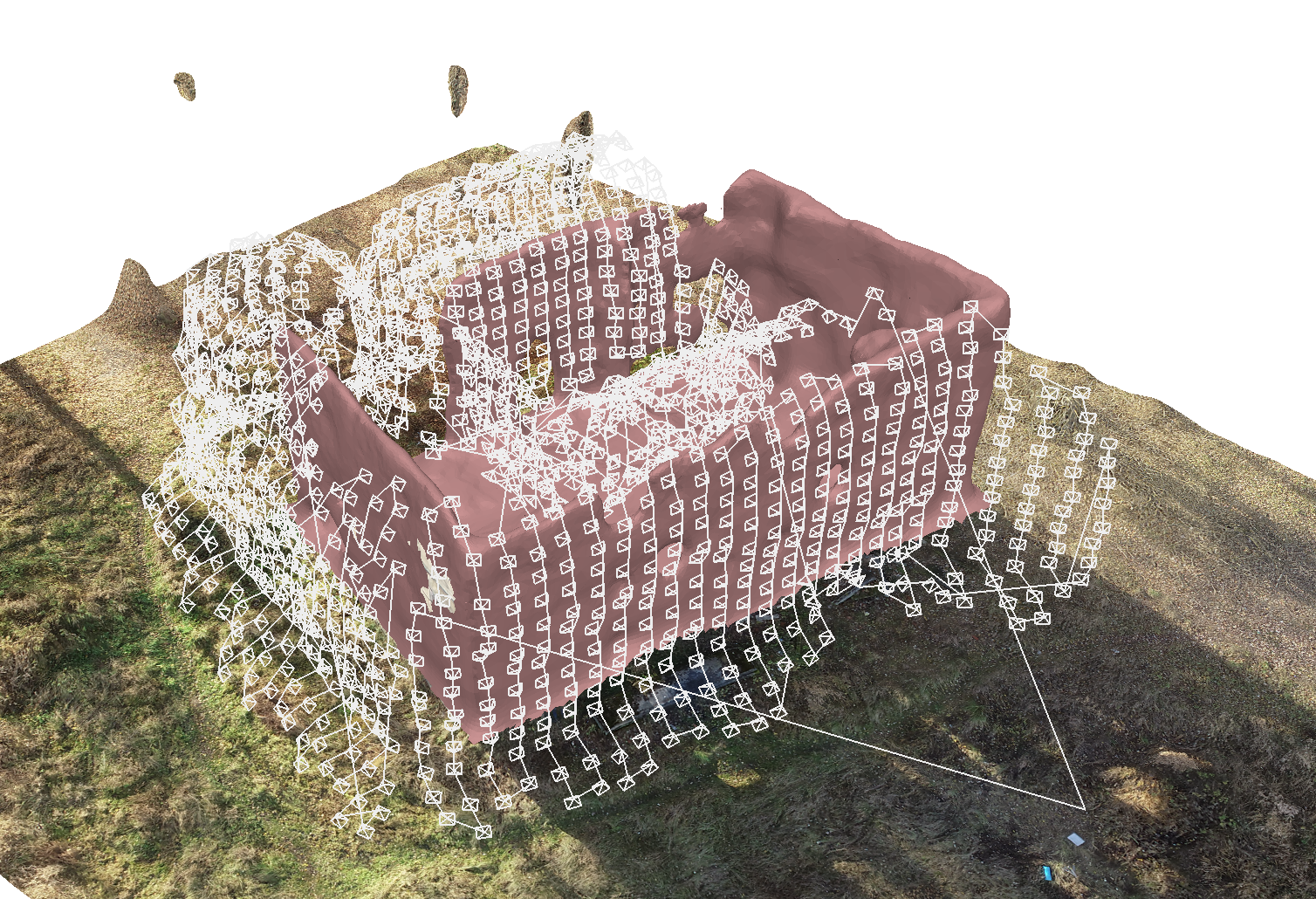 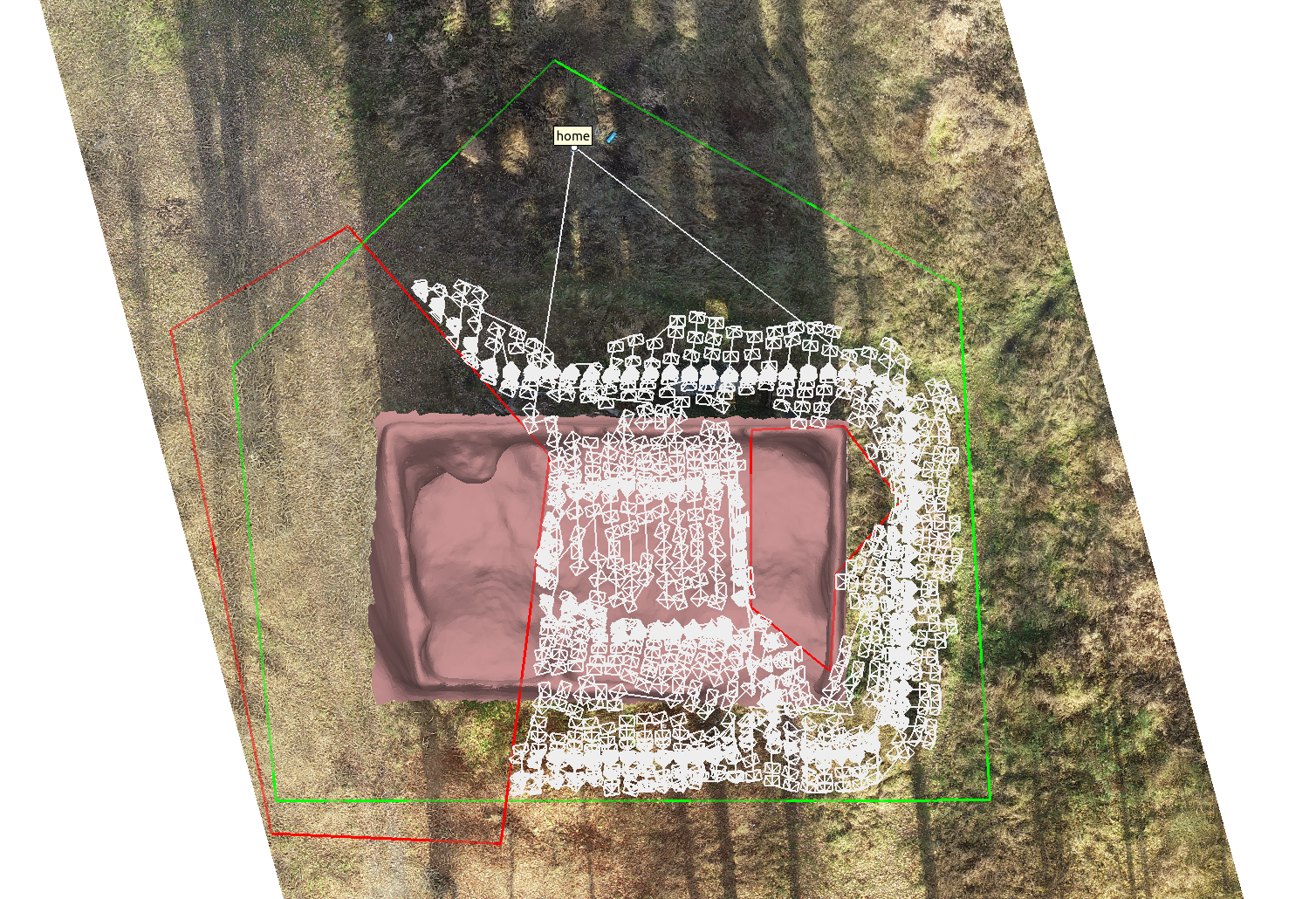 To export the created mission right click on the Roundtrip instances in the chunk's contents of the Workspace pane and select Export Camera Track option from the context menu, then specify the path to the exported file. 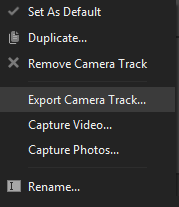 Run imported waypoint mission. If drone battery gets low during the flight, replace it and restart the drone at the same altitude as that of specified home point. You will need to manually navigate drone to the position from which the last visited waypoint is in line of sight to resume automatic flight safely. 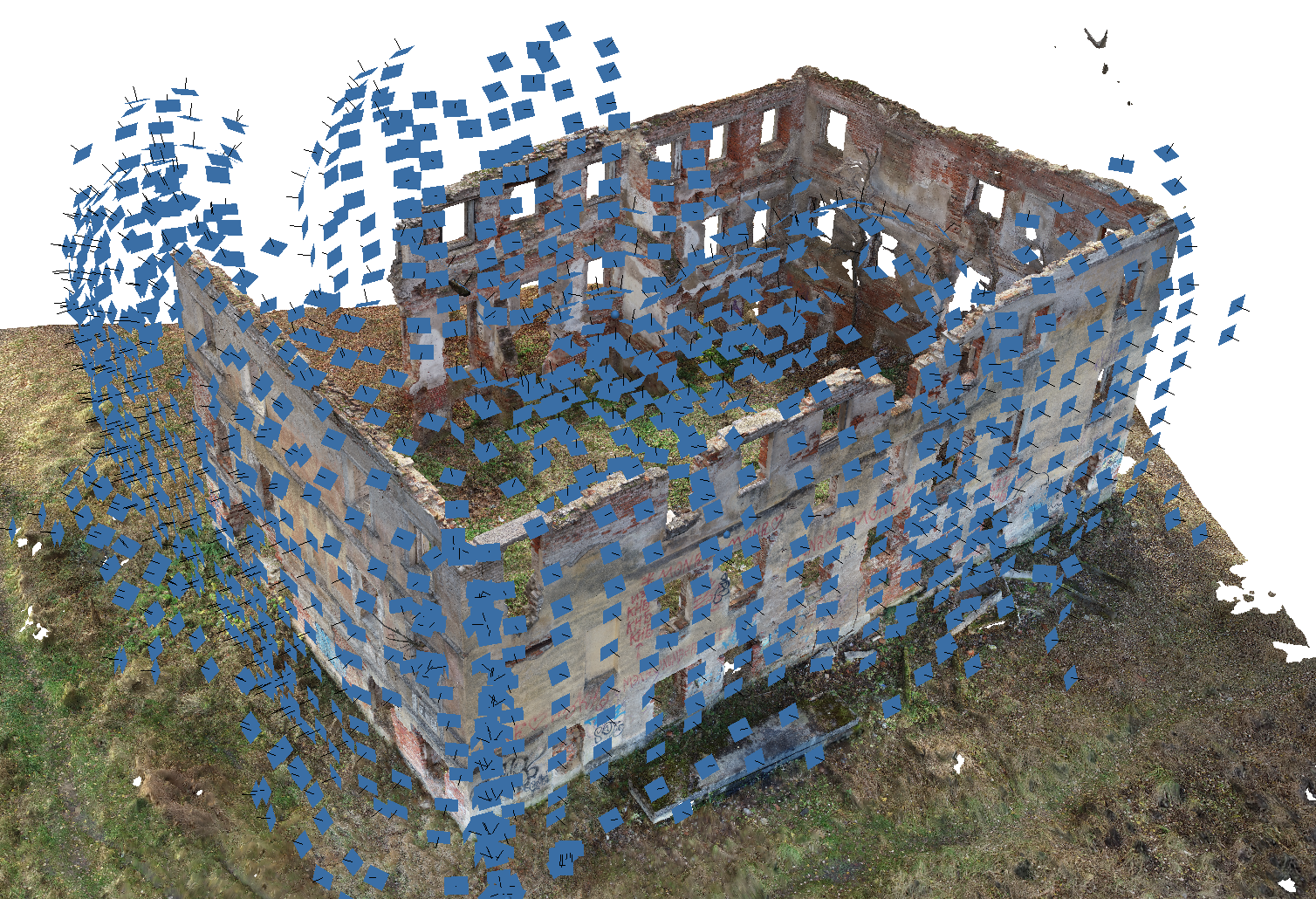